Things that make you say “duh”:

One of the search terms I keep getting in my statistics is the following phrase: “astronaut farmer wallpaper”, in variant forms. So, here I am to fuel the entertainment for this search once again by blogging about watching my first live Webcast on the space shuttle. I remember watching this stuff via television when I was younger, and this Webcast recaptured and conjured up some of those memories again. 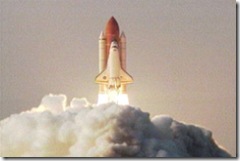 The official countdown clock is shown, in sync with Mission Control. While waiting for the launch, a picture from the inside of the shuttle looking out (to the ground, etc.) is taken. The tension mounts considerably as the shuttle launch is about to commence. You could cut the tension with a knife, especially since this launch sequence bears remarkable similarity to the launch of the Challenger shuttle (that had disastrous consequences). Everyone is in good spirits, and no one is expecting failure here, though all precautions have been taken, just in case. Mission director Michael Leinbach encourages all by saying, “Good luck, godspeed and have some fun up there.”

The engines are humming, and the ladders and scaffolding moves out of the way. It’s one minute to go and counting. The shuttle’s computers take over the countdown, and it starts the launch!!  Watch the rockets fly in a blaze of glory! Everything goes well, and the boosters prepare to separate (and do) within two minutes of launch. The shuttle continues at 3400 miles per hour going upward to over 4000 mph. Over half a ton of fuel is already expended (now that’s a gas bill!). Three good fuel cells and power cells; the engines keep the Endeavor going onward through the sky, gaining altitude. The shuttle swivels to enhance communications. “Go for the plus x, go for the pitch.” is said several times, perhaps for encouragement, as well as to convey instructions. External tanks prepare to separate, do, and the Endeavor is in orbit around the Earth. It’s time for the Astronauts to get to work, capturing photos and videos for analysis. A smooth launch that takes all of ten minutes.

Wow…what a rush of emotions! I realize its antiquated to be excited about this stuff, but I’m reliving a moment, so thanks for bearing with me through it all.

Godspeed, everyone..and remember to have fun out there! A good message to remember, I think, especially in time of upset. 🙂

…that you’re a chemist at heart when you look at this cheezburger post and think it would be cool if cheese really can be made out of carbon, helium, and selenium.

…God has a sense of humor -or at least you do- when seeing Paris Hilton screaming and crying on her way back to the slammer. (*wahhhmbulance alert*)

…you spend too much time looking at blogs when you recognize a picture in the paper and crack up laughing, read the article and then realize there are other people just as twisted as you.

…sometimes you just have to see somthing that makes you think, like An Historian’s Craft  (bookporn included – LOL) and A Like Affair With Words (enough said.)
…I clearly haven’t enough to do when I have time to blog about lil miss heiress. yikes!

I’m off to find a life…until next entry.

Good blogging, reading, playing sports, or whatever makes you happy. 😛

I’ve been combing YouTube again for goodies. It’s amazing what one can find sometimes. For example, I found some neighborhood friends online describing an accident that recently happened. Yikes..talk about a news update. Luckily, the damage was minor and everything’s repaired. Now, it just lives in YouTube history.
Yet another reason why I like biology, as if I need another reason. Here’s a visual of a cell’s insides…

And, another reason why I love chemistry. I practically drool at this next video, mainly because it reminds me of organic chemistry class. It’s about our “friend” cholesterol.

Within the video is what many people try to avoid these days (at least the LDL aka bad cholesterol), taking pills or more extremes, like surgery. What fun, eh.

For anyone that’s bored now…or just ready to move things along, let’s kick it up a notch and watch/listen to some Dr. Who – Weird Science! (long video, ~6min.)  It’s an eighties kind of cool.  For all you health enthusiasts out there, work out to that video, and you’re bound to lose weight just from jumping around a lot to that beat. 😀

Whew! That’ll do it for me for the moment. Science rocks!

Blogging for a Good Book

A suggestion a day from the Williamsburg Regional Library

TNBBC's The Next Best Book Blog

Small Press Junkies Searching for the Next Best Book

Time is a companion that goes with us on a journey. It reminds us to cherish each moment, because it will never come again.

WordPress.com is the best place for your personal blog or business site.